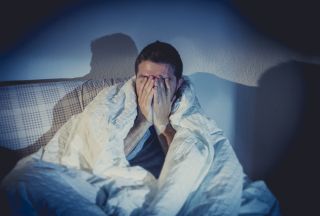 I am not sure if it is my ME, Fibromyalgia or CFS (or something else) but almost every morning now I wake up with a pounding migraine.

For example, until this morning I woke up with what I thought was the worst headache I’ve ever had, again, five nights in a row. In my teens I had migraines that were usually over one eye and pierced through me like a hot poker, but now my entire head pounds with the same intensity.

It usually takes ten hours or so to get rid of them, which is exhausting and quite debilitating. So my routine for the previous five nights was wake up between 1am and 4am with this whole head pounding migraine, try to get to the fridge for the packs of frozen beans (or wake up my poor suffering wife to get them for me), take a rizatriptan and a valium and remain awake and wait for the headache to go. If I fall back asleep the headache returns to its full-on state. No, I have no idea why.

Sometimes the first dose of tablets kills it, but more often than not it reduces it by perhaps fifty percent leaving me with the choice of another dose or cope.

The rizatriptan only comes in four tablets per script so I am reluctant to take more than one, but sometimes the pain dictates that I have no choice.

I can try to take another valium but although this will help my headache it almost always will put me to sleep as well. When I sleep with the remains of a headache I always wake up with it worse again, most often the migraine has returned. So a bit of Catch 22 there, just for fun.

Last night I woke at 12.30am with the beginnings of a headache, my queue to stay awake until it goes. With CFS staying awake is incredibly counterintuitive but unless I want my headache to become worse, I must. So I stayed awake fighting the headache until about 3am. I then woke at 5am and the beginnings of one was still there so I took a valium. Then the fight to stay awake began, which this time I managed to win until 7.30am when my headache finally went. I was then able to sleep until 9.30am.

All up 5-6 hours sleep, not enough for a normal person let alone one with CFS who fights to stay awake all day.

However it is far better than normal, when I often fail to stay awake and fall asleep for several hours and wake up with a migraine. The frozen beans then come into play as does more medication.

When my chronic illness first began I would have two or three of these headaches per week. Now I am lucky to have one or two mornings without one.

So every night when I go to bed it is with severe trepidation as I know what sort of night I am going to have. The only unknown is how bad will the headache be and can I stop it from becoming a migraine that makes me want to chop my head off.

How did you sleep? Personally I’d prefer to never sleep again.